In the last few posts, I have been telling you about our upcoming outreach to the Central American nation of Belize. Our goal during this outreach is to communicate the Gospel to every person in the entire nation over a one-week period. This is the biggest outreach our ministry has ever organized and we cannot do it without your help. Let me share with you some of the various outreaches that will take place in July.

How to Reach a Nation for Jesus
Nine evangelists and over two hundred missionaries will be partnering with us during our outreach to Belize. We are invading the nation with an army of people who will demonstrate the love of Jesus in tangible ways. During our week of ministry we will be doing events in the nine major population centers in Belize. Here are some of the activities that are going on:

Children’s Fiesta – In Belize City we will hosting a two-day children’s festival. We expect over 5,000 children to attend. We will be sending buses to dozens of local villages and bringing the children together for fun and games and to hear the Gospel. For $100, you can sponsor a bus full of one hundred children.

Youth Concerts – Fifty percent of Belize is under the age of eighteen so we are attracting the youth by using music and extreme sports. For $5,000, you can sponsor renting a sound system that 15,000 young people can hear.

FREE Medical Exams – We have a team of twenty doctors and nurses who will offer free medical exams in the poorest neighborhoods of Belize City. $700,000 worth of medicine has been donated but we have to carry it down in our suitcases. For $70, you can sponsor the cost of shipping an extra suitcase full of medicine to Belize.

Food for the Hungry – Thanks to the generosity of our partners, a forty-foot shipping container full of donated food has been placed on a ship and is on its way to Belize right now. We will be giving away over 270,000 meals to the children of Belize. If you want to be a part of this food distribution, your gift of $30 feeds 1,000 children.

Business Leaders and Political Leader’s Seminar – We are inviting the top business leaders in the country together for a leadership seminar at one of the nicest hotels in Belize. Successful American business leaders will share principles of business success and at the end of the seminar; we will share the greatest secret of success, which is to serve Jesus Christ. You can sponsor a business leader to attend the event for $25.

Pastor’s Dinner – On our first night in Belize, we will gather the pastors together for a banquet. Our team will serve food to every pastor and pray for them. We will also be giving each pastor a box full of commentaries and study books. Your gift of $20 feeds a pastor and his wife.

Follow-Up Material – Over 30,000 Bibles have been donated and follow-up material is ready for us to give away to the people who get saved at all of our events in Belize. Your gift of $2 will sponsor one bag of discipleship material for a new believer.

If you add up the costs of the Belize Festival of Hope, you can see that doing an outreach of this magnitude requires a huge amount of resources. But, this investment will be worthwhile if we can change the trajectory of an entire nation. We expect thousands of people to be saved! We believe that Belize will never be the same again. We are claiming the nation of Belize for the kingdom of God.

We cannot do this outreach alone. We need your help. Please allow the Lord to speak to you. What part of the outreach do you want to be a part of? Can you sponsor one hundred children to come to the Kid’s Fiesta? Or could you sponsor a businessman or woman to come to the Leadership Seminar? Or perhaps you could sponsor the television outreach? Please participate in whichever area God puts on your heart.

P.S. As you read this letter, I will be in Belize preparing for the outreach. Your financial gift this month will allow us to change lives for eternity in the nation of Belize. Thank you for your generosity!   Click HERE to GIVE

Posted by Evangelist Daniel King at 9:32 AM No comments: Links to this post

In 1997, I was given the opportunity to be a clown at a Kid's Fest for Luis Palau in Juarez, Mexico. Today, I was able to say thank you to Brother Luis for his inspiration and his example. 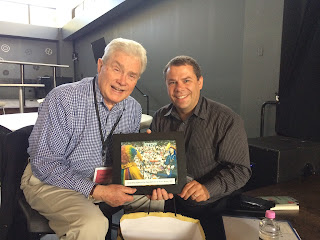 I wrote Dr. Palau a letter that says, "In 1997, you did a Festival in Juarez, Mexico. At that time, my parents were missionaries in Juarez and my father was involved in helping to mobilize churches for the festival. Back then, my brother and I dressed up as clowns and did small children's festivals in the barrios of Juarez. We were just teenagers, but we were invited to minister at your Kid’s Fest for thirty minutes. Over 7,000 children attended. It was the biggest crowd I had ever been in front of. Thousands of children responded to the Gospel. 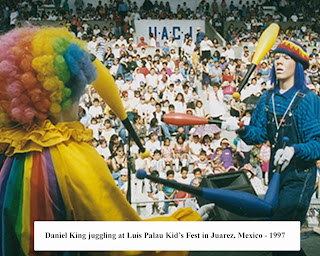 It was this opportunity to minister that helped put a dream in my heart to become an evangelist. Since then, I have visited 69 nations and led over two million people in a salvation prayer, but it all started at a Luis Palau Kid's Fest in Juarez, Mexico.
Now, I am a member of the Next Generation Alliance. I am thankful for your example, your encouragement, and for the way you give other evangelists opportunities to minister, even when they are teenage juggling evangelists who wear clown makeup."
If you are an evangelist and you want to connect with Dr. Luis Palau's ministry, I encourage you to join the Next Generation Alliance.
Posted by Evangelist Daniel King at 9:17 AM No comments: Links to this post

The biggest outreach our ministry has ever done is rapidly approaching. On July 22, we will endeavor to reach an entire nation with the Gospel at the Belize Festival of Hope. We have been working on this project for over two years now and in my letters over the last few months, I have been telling you about many of the details of this historic event.

I just returned from a two-week set-up trip to Belize. On this trip I traveled to cities all over Belize in order to meet with pastors, organize publicity teams, arrange places for all of our team members to stay, and to do television and radio appearances on the biggest media stations in the country. There is tremendous excitement among the local churches and the entire country is starting to talk about what is coming. Based on what people are saying, this is going to be the biggest evangelistic event in the history of Belize.

GOOD NEWS: Our food container with over 270,000 meals for the children of Belize has arrived in country. Plus, our book container with 30,000 Bibles made it through the port and is standing ready.

Can You Help?
One of my friends asked me a couple of days ago, “What can I do to help you reach Belize with the Gospel?” I replied, “All the ground work has been completed, now the best thing you can do to help us is PRAY.”

I know that nothing can succeed without God’s help. At this point, I am asking all of my friends to help me bathe the Belize Festival of Hope in prayer. Can you join us in this effort? You may not be going with us to Belize, but your prayers will help us lead people to Jesus.

Prayer for Belize
Here are some prayer points for you as you join us in this effort to impact an entire nation for Jesus. 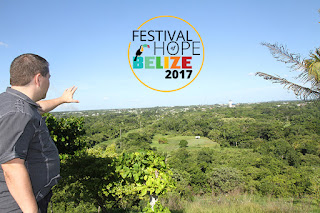 * Pray for the children and youth of Belize. Jesus said, “Let the little children come to Me, and do not forbid them; for of such is the kingdom of heaven.” (Matthew 19:14).

*Pray for unity among all the churches of Belize. Pray for revival among the churches. Pray for believers across Belize to hunger for more of God. “How good and pleasant it is when God’s people live together in unity!” (Psalm 133:1).

* IMPORTANT: Pray for good weather during the Festival of Hope. “…even the wind and the sea obey Him!” (Mark 4:41).

* Pray for supernatural provision for the Belize Festival of Hope. “My God shall supply all your need according to His riches in glory by Christ Jesus” (Philippians 4:19).

* IMPORTANT: Pray for the follow-up that will happen after the Festival of Hope. Pray for every convert to become a disciple. “Go therefore and make disciples of all the nations” (Matthew 28:19).

Please keep the Belize Festival of Hope on your prayer list between now and July 22. Your prayers will make a difference.

P.S. Your financial gift this month will help us reach Belize with the Gospel. We still need about $12,000 over the next thirty days in order to make this vision come to pass. Your generosity is much needed and appreciated. Click HERE to GIVE.
Posted by Evangelist Daniel King at 8:32 AM No comments: Links to this post