Kalyn's Secret: A book every family should read 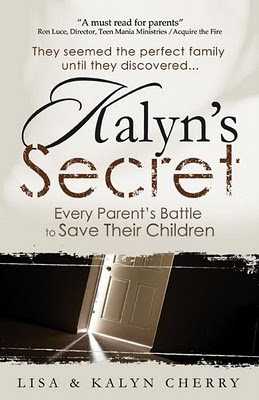 One of our close ministry friends recently wrote a book that I think every family that wants to protect their children should read. Here is some information about the book:

June 2010 - Tulsa, Oklahoma – Kalyn is the oldest daughter in the robust Cherry tribe of twelve. A pastor’s kid, Kalyn was active in church, a straight-A student and very loving to her parents and siblings…seemingly the perfect child. So how, at the age of 14, did she become involved with a man in their church three times her age? An $800 cell phone bill was the tip of the iceberg as the Cherry’s research for truth brought them face to face with a nightmare that had grown even under their watchful eyes. Overnight their daughter turned from a sweet, loving contributor to the family to a rebellious, suicidal, angry teen.

Kalyn’s Secret: Every Parent’s Battle to Save Their Children is a more than a compelling story of overcoming victory. The Cherry’s transparently reveal both sides of the nightmare as readers get to look into the parental “dark night of the soul” as well as the confused heart of the teen/not yet adult mindset and subsequent irrational behavior. In search of professional help, counselors misdiagnosed the problem for the first two years. Finally, the Cherry’s found a miraculous ray of hope that set them on a course of healing. In Kalyn’s Secret they share:

􏰀 The warning signs they missed.
􏰀 What they should have done different.
􏰀 Why parents cannot reason with their teen as a rational adult.
􏰀 The disturbing similarities between drug and alcohol addictions, eating disorders, sexual predators and perversion stalking today’s kids.
􏰀 Most importantly, the vital keys every parent needs to avoid the camouflaged pitfalls our children face each day.

This is a story of hope. Parents will benefit from the Cherry’s extensive research revealing tools and insights for those who find themselves already in the battle and those desperately working to avoid it.

The Cherry’s five-year battle for restoration of their daughter’s mind and heart will encourage every parent who finds themselves in “every parent’s battle to save their children.”

“As a Dad and as a Husband – I want to do everything I can to protect my family. This book offers great insight to help prevent physical and spiritual attack from outside influences and is an incredible resource to help those already in the battle. It is a message of hope for all parents.”
Michael W. Smith
Singer/Songwriter

“A must read for parents.”
Ron Luce
Director, Teen Mania


Posted by Evangelist Daniel King at 10:46 PM No comments:

I'm Preaching in California, July 18: Come if You Can! 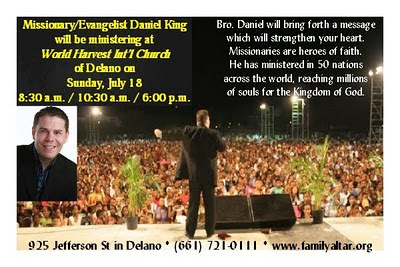 Posted by Evangelist Daniel King at 7:58 PM No comments:

The Last Airbender: How should Christians respond to Buddhist philosophy?

The Last Airbender is the newest movie directed by M. Night Shyamalan. Based on a popular Nickelodeon cartoon, the movie is filled with references to Buddhist philosophy. With the increasing popularity of Buddhism in America, what should be the Christian response? Here is an article I wrote comparing the two religions.

The Two Trees
By Daniel King

In Bihar, India there stands a tree called the Bodi Guya tree. Tradition claims that under this tree Buddha was enlightened after many days of meditation.

At the Mount of Olives in Israel, in the garden of Gethsemane, there stands an olive tree. Tradition claims that on the night he was betrayed, Jesus sat under this tree and cried out to God his Father.

I have seen both trees. I found that both of these great men struggled with the same problem while sitting under their respective trees. Both Buddha and Jesus suffered and confronted the problem of suffering, but they offered two different solutions

Suffering is a universal problem. In these modern times, one only has to watch the news for a few moments to discover horrible suffering somewhere in the world. A fire burns down a house. Famine causes starvation. War kills the innocent. Disease ravages bodies. The wealth of one stands in sharp contrast to the poverty of another. Children go to bed hungry. In many places, there is no hope, no dignity, no self-worth, and no future for humanity.

Buddha was deeply impacted by the suffering he saw four thousand years ago. Buddha was born as a prince and raised in protected luxury until one day he saw a poor leper. This confrontation with reality shook him and he began searching for a solution to the problems of this world.

In India, where Buddha walked there is an air of oppression throughout the society. Their fatalistic and pessimistic worldview promotes the idea of karma (works), reincarnation, and the caste system. Millions suffer their entire lives. Few believe that life can be better.

Under his tree, Buddha discovered the four noble truths of Buddhism. The first truth was “Life is Dukkha” (suffering). As he wondered around India as a monk, he saw the horrible plight of the beggars, experienced the depths of human poverty, and questioned old age, death, and the afterlife. Under that tree, he reached a conclusion, all of life is full of dukkah, nothing but suffering.

The second noble truth Buddha articulated is that “This suffering is because of our desire.” What desire? The desire to have a hot meal, a place to sleep, clothes to wear, sanitation, health care, education, to have someone who loves you and whom you can love, a better life for one’s children, the desire to live life to the fullest. When we want something and don’t get it, we start to suffer.

The third truth of Buddha’s enlightenment is that “When desire is eliminated, suffering is eliminated.” If you want nothing, you will not be disappointed when you do not get it.


Buddha’s fourth truth revealed the “Eight-Fold Path” to removing desire from your life. This led to the Buddhist philosophy of renunciation that has been practiced throughout the ages. Buddhist monks give up all their possessions, shave their heads, and live extremely ascetic lifestyles. They meditate for years attempting to achieve enlightenment, a place of nothingness; no desire, no thoughts, hopefully no suffering.

Under his tree, Jesus dwelt with suffering in a different way. According to Christianity, in the beginning of time, there was no suffering. God created the first man and woman and put them in a beautiful garden. But, one day in the Garden of Eden, Adam and Eve disobeyed God. This act of disobedience is called sin. Sin is what causes suffering.

When sin entered the world, sickness, hate, fear, and everything else that breeds suffering entered along with it. The Bible says “The wages of sin is death.” Every person who sins deserves to suffer and to die. The Bible says, “All have sinned.” Every person on earth has disobeyed God; we have lied, cheated, coveted, murdered, and disobeyed God’s commands. Thus, all humans suffer because of sin.

Jesus was God’s answer to the problem of suffering. Jesus, the Son of God, was born two thousands years ago in the city of Bethlehem. When Jesus walked the dusty streets of Israel, he too saw suffering. He experienced the depths of grief and pain. He cried. But his response was one of compassion.

When Jesus saw a man who was crippled for thirty-eight years, Jesus healed him by saying, “Take up your bed and walk.” When Jesus found a dead twelve-year-old girl, he brought her back to life. When a blind man approached Jesus, He restored his sight. When five thousand men plus woman and children were hungry, Jesus multiplied five loaves of bread and two fishes to feed the entire crowd. Jesus performed many miracles to set people free from their suffering.

But, Jesus wanted to permanently cure suffering. The only way to accomplish this was for Him, as a perfect, sinless, Son of God, to suffer and die in place of humanity.

This is why Jesus laid in agony beneath his tree. His purpose for coming to earth was to set mankind free from suffering, but in order to triumph, he knew he must face the ultimate pain. He knew he would be flogged with a whip, spat upon, deserted by his friends, nailed to a cross, and left to die in shame. He cried out to God, “Father, if you are willing, take this cup from me; yet not my will but yours be done.” He begged God to take the cup of suffering from his lips, yet because it was the only way to secure salvation for mankind, Jesus took the cup and drank deeply. Why? Because of his compassion.

When Buddha saw human suffering, he decided that suffering is caused by desire, and the only way to avoid suffering is to avoid desire. Jesus came, not to set us free from desire, but to fulfill all our desires. Jesus said, “I have come to give you life and life more abundantly.”

Jesus did not reveal four noble truths, Jesus only revealed Himself. Jesus said, “I am...the Truth...anyone who comes to the Father must go through me.”

Today, Jesus still confronts suffering with compassion. Anyone who calls on the name of Jesus will be set free from suffering and live eternally in heaven, a place better than nirvana. The Bible says, “the gift of God is eternal life through Jesus Christ our Lord.”

According to the Bible, in the Garden of Eden, there were two trees. The first was the Tree of the Knowledge of Good and Evil, and the second was the Tree of Life. The first tree represents human knowledge and human effort, and the second represents the God kind of life. Buddha sits beneath the first tree, he developed the greatest human system in history for dealing with pain. Jesus sits beneath the second tree, he simply offers eternal life to all who come to him.
Posted by Evangelist Daniel King at 7:55 PM 5 comments:

In the Shadow of a Mosque 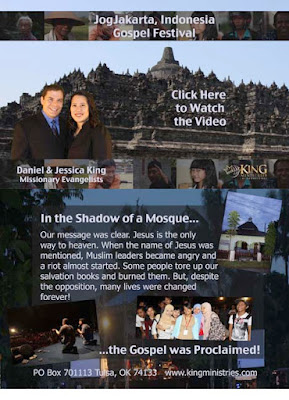 Posted by Evangelist Daniel King at 8:25 AM No comments: