I Need Your Prayers - Unrest in Brazil is Threatening Our Festival 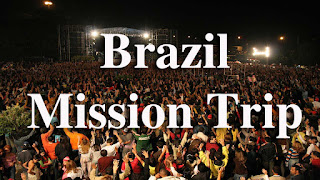 I need your prayers.  Today, I am headed to Brazil for a Gospel Festival in the city of Caicó.

As our team is getting on the plane, we received word about a strike that is paralyzing the country of Brazil.

The truck drivers of Brazil are worried about rising gasoline costs and they have gone on strike. They are blocking many of the roads with their trucks and because of there actions food is not getting to the stores and gasoline is not getting to the gas stations. Empty grocery stores are causing lots of unrest as people worry about what they will eat.

The president ordered to police to clear the roads, but the police disobeyed because they say they are on the side of the truck drivers in the dispute. So, now the President has ordered the military to clear the roads. In the midst of this chaos, many roads are blocked and many airplane flights are being canceled because of a lack of fuel. For more information, click here.

So I need your prayers for our Gospel Festival that is happening this week.

1. Pray that our entire team makes it to the city where the Gospel Festival will take place.

2. Our sound system is on a truck coming to the Festival from one thousand kilometers away. Pray it will be able to pass through all the roadblocks.

3. Pray many people will come to the Gospel Festival despite the unrest.

4.Pray the chaos will make people turn toward God and many people will be saved.

Posted by Evangelist Daniel King at 4:13 PM No comments: Links to this post

We are only a few days away from going to Caicó, Brazil for a Great Gospel Festival.

Our team will be visiting schools to invite students to the festival. For the young people, we have a strength team who will be breaking stacks of bricks, tearing phone books in half, and blowing up hot water bottles in order to attract teenagers to the festival. One member of our team is a children’s minister who will be doing a big kid’s festival. We are purchasing lots of toys and candy to give away to the children. We will be doing a leadership conference for the pastors and three nights of crusade meetings.

Caicó, Brazil has a population of 80,000 people and it has one of the highest rates of suicide in the nation of Brazil. It is known as a stronghold of idolatry. Our goal is to reach every person in the city with the Gospel. We expect 10,000-15,000 people to attend the crusade meetings.

Research Project
This Caicó crusade will be my sixth time preaching the Gospel in Brazil, but this will be one of the most significant of all my crusades.

This is because in addition to preaching the Gospel to the crowd in Brazil, I will also be conducting research at the same time.

For the past three years, I have been working on earning my Doctorate of Ministry degree at Oral Roberts University. This consisted of taking on-line classes and doing intensive one-week seminars on campus. All of my class work has been finished and now all that remains is writing my dissertation.

The Doctorate of Ministry degree is designed to be a practical degree and so the dissertation for my doctorate is called an “Applied Research Project.”  It consists of writing several chapters of theological and historical research and then conducting a research project.

You probably will not be surprised to find that the focus of my study is mass evangelism. This year, I have been reading dozens of books on the history of mass evangelism and reflecting theologically on the importance of evangelism.

Now at our upcoming crusade in Brazil I will complete the research part of my project. The goal is to provide an academic snapshot of a large evangelistic event in a developing nation. I have been doing crusades like this for years, but now I will be able to demonstrate academically what God is doing.

The main part of the research will consist of taking a survey of all the people who attend the crusade. Here are some of the questions I will be trying to answer: Who attends a large evangelistic event? What percentage of the crowd are unbelievers? Are the attendees religious or secular in their background? If they are religious, what church do they identify with? Why did people decide to attend? How did people hear about the event? Which part of the advertising is successful? What attracted people to come to the event? Do they come for the music, or the preaching, or the spectacle? Or do they arrive because they are bored and there is nothing else to do?  Do they attend out of curiosity or because they want to receive a miracle or because a friend invited them? What beliefs do people bring to the event? What are the demographics, economic level, and educational level of the people who attend? Are they children, youth, or adults? Do the unbelievers who attend understand the message about Jesus that is presented? Do people remember the information that is imparted through the sermon? Do people respond to the message? How many people are getting saved at the event?

In addition, we will be giving pre-crusade surveys and post-crusade surveys to all the participating pastors in order to capture their viewpoint and interviewing the volunteers who choose to participate as ushers and councilors at the crusade.

Thank you! This month your financial gift to our ministry will be maximized because it will have an impact on the nation of Brazil, and it will have an academic impact on evangelism that will endure for many years to come.

P.S. We still need your help in order to complete the budget for the Brazil crusade. Please pray for many people to be saved and please rush your financial gift to us. We need it in just a few days. Every dollar you give will help us reach more people for Jesus in Caicó, Brazil. Thank You and God Bless You!

To GIVE, click HERE
Posted by Evangelist Daniel King at 2:05 PM No comments: Links to this post

A Tale of Two Mothers

For Mother's Day today, I preached at a church in South Africa. I thought you might be interested in the notes from the sermon I preached...


A Tale of Two Mothers