Is Hell a Real Place? Jesus Thought It Was.

The sad truth about Rob Bell's new book is that thousands of people will go to hell because he told them not to fear it.

Luke 16:27-28 “Then he said, ‘I beg you therefore, father, that you would send him to my father’s house, for I have five brothers, that he may testify to them, lest they also come to this place of torment.’”

Is hell a real place? Jesus said it was. Jesus told this vivid story about the horrors of hell.

Once there was a rich man who always dressed in the best clothes and feasted everyday on the best foods and wines available. At his front gate there was a beggar named Lazarus who suffered from open sores on his skin. Everyday Lazarus waited by the gate, hoping to be fed with the leftovers from the rich man’s table. His only relief was when the rich man’s dogs came and licked his sores. One day, both the beggar and the rich man died.

The beggar went to heaven. The rich man went to hell. As the rich man was being tormented in the fires of hell, he looked up and saw the beggar in heaven, standing next to Abraham. He shouted to them, “Father Abraham, have mercy on me and send Lazarus to me. Have him dip the tip of his finger in water and touch my tongue, for I am tormented in this flame.”

Abraham replied, “Between us there is a great chasm, so that no one can pass from heaven to hell, or from there to here.”

Then, the rich man became concerned for his five brothers who were still living. He begged Abraham, “I beg you therefore, father, that you would send Lazarus to my father’s house, for I have five brothers, that he might testify to them, and prevent them from coming to this place of torment.”

Abraham refused the rich man’s request, saying, “If your brothers have not heeded the words of Moses and the prophets, then they will not listen to Lazarus, even if he comes back from the dead.”

In this story, we find a soulwinning call from the pits of hell. If we could hear the voices of people who have gone to hell, they would shout with all their might, “Don’t come here!” ”

Some theologians have dismissed this vision of hell by saying it is nothing but a parable. It is not a parable; it is a horror story about a reality that lies just beyond death’s door. In every parable which Jesus told, the characters have no names, but in this story Jesus tells us the names of the people in the story. They are real people with real names engaging in real dialogue.

Other theologians have tried to soften the threat of hell by saying that hell is simply a state of nothingness. But for this rich man, hell is a genuinely horrible place. This man has his senses, his memory, his reason; he is thirsty, he is in torment, he can think, and he is concerned about his family members who are still alive.

Our society often says that hell is one big party, a place for old friends to get drunk together for all of eternity. But according to Jesus, hell is not a party; it is torment. This man suffers from such agonizing thirst that he begs for just a drop of water to be placed on his tongue.

In this horror story, we hear a soulwinning call from hell. The rich man is begging for someone to go tell his family that hell is a real place. If the dead could speak, they would warn us of the dangers of hell.

This is how I know psychics are fake. When psychics claim to talk to voices from “the other side,” those voices always have nice things to say. If psychics really spoke to dead people, many of those people would be shouting, “Hell is a real place. Tell my relatives to get their lives right with God.”

If the church really had a revelation about the reality of hell, it would light a fire under us to be soulwinners. If you spent just ten seconds in hell, how motivated would you be to rescue people from such a horrible fate? Ten seconds in hell would provide enough motivation for ten thousand years worth of soulwinning efforts.

I need your opinion.

The first book I wrote was "Fire Power." It has been very popular and now we are going to republish it with a new cover. I just got this cover design back from our designer and I need your opinion. Does this look like a book that you would want to buy? 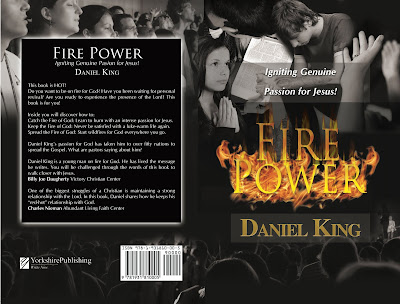 We are also redoing the cover on my book "Healing Power" What do you think of this cover? Do you have any suggestions or ideas? 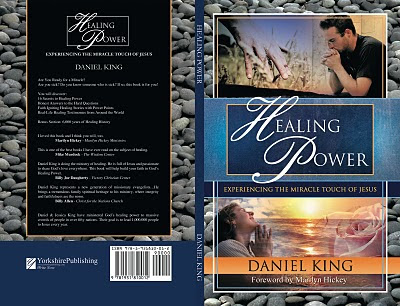 Posted by Evangelist Daniel King at 11:53 AM No comments:

Recently I was at a church and after the service, someone handed me a poem. I thought you might enjoy it.

“Go,” said the Master, “go, Son,
In the darkest of parts
Of this world so torn up by sin,
With its manifold bleeding hearts.”

Go where the night is the blackest,
Go where sin’s reign is complete,
Go in the name of King Jesus,
That name that knows no defeat.

Go give balm to the wounded,
The balm for without and within,
The balm that can heal all the bruises,
Caused in the conflict with sin.

Go where the lost and the dying,
The sad and differing sigh,
Take hope and cheer to the weary,
Tell of the home that’s on high.

Go tell the sweetest of stories
That mortals or angels can sing
Of the love of the Savior in glory,
How he offered to meet death’s cruel sting.

Tell of his love for the sinner,
How he healed the broken and torn,
Of his words so full of compassion,
How he cheered the weary and lorn.

Tell how He went back to glory,
Tell of His ministry there.
Tell of His promises many,
That for His soon return we’ll prepare.