To give to the Madagascar Crusade: Click HERE
Posted by Evangelist Daniel King at 11:38 AM No comments: Links to this post

The Miracles of Church History

* For more detailed information on the history of healing, I encourage you to read the book by my friend, Dr. Eddie Hyatt, 2,000 Years of Charismatic Christianity
Posted by Evangelist Daniel King at 11:55 AM No comments: Links to this post 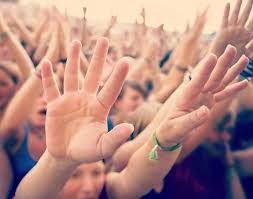 The main belief of Charismatics is that God is still active and moving in the world today. This is the opposite of the cessationist view that miracles ended when the Apostles died. Here is a list of twenty-six distinctive Charismatics beliefs organized under five main headings. These teachings have brought enormous growth to the body of Christ around the world over the past thirty years.


1. Infilling of the Holy Spirit as a subsequent experience to salvation. “be filled with the Spirit” (Ephesians 5:18 NKJV).
Speaking in Tongues / Glossolalia “I wish you all spoke with tongues” (1 Corinthians 14:5 NKJV)
Interpretation of Tongues  “…unless indeed he interprets, that the church may receive edification” (1 Corinthians 14:5 NKJV).
Holy Spirit Guidance “However, when He, the Spirit of truth, has come, He will guide you into all truth; for He will not speak on His own authority, but whatever He hears He will speak; and He will tell you things to come” (John 16:13 NKJV).

2. Signs and Wonders “And these signs will follow those who believe: In My name they will cast out demons; they will speak with new tongues; they will take up serpents; and if they drink anything deadly, it will by no means hurt them; they will lay hands on the sick, and they will recover.” (Mark 16:16-18 NKJV).
Healing “But He was wounded for our transgressions, He was bruised for our iniquities; The chastisement for our peace was upon Him, And by His stripes we are healed” (Isaiah 53:5 NKJV).
Miracles  “Heal the sick, cleanse the lepers, raise the dead, cast out demons. Freely you have received, freely give” (Matthew 10:8 NKJV).
Faith  “But without faith it is impossible to please Him, for he who comes to God must believe that He is, and that He is a rewarder of those who diligently seek Him” (Hebrews 11:6 NKJV).

3. God Speaks to people today “Therefore Eli said to Samuel, “Go, lie down; and it shall be, if He calls you, that you must say, ‘Speak, LORD, for Your servant hears.’” So Samuel went and lay down in his place” (1 Samuel 3:9 NKJV).
Prophecy “Pursue love, and desire spiritual gifts, but especially that you may prophesy” (1 Corinthians 14:1 NKJV).
Words of wisdom “For the LORD gives wisdom…” (Proverbs 2:6 NKJV).
Words of knowledge “for to one is given the word of wisdom through the Spirit, to another the word of knowledge through the same Spirit” (1 Corinthians 12:8 NKJV).
Visions & Dreams “Your young men shall see visions, Your old men shall dream dreams” (Acts 2:17 NKJV).

4. Power in the Spiritual Realm “And when He had called His twelve disciples to Him, He gave them power over unclean spirits, to cast them out, and to heal all kinds of sickness and all kinds of disease” (Matthew 10:1 NKJV).
Discerning of spirits “Beloved, do not believe every spirit, but test the spirits, whether they are of God; because many false prophets have gone out into the world” (1 John 4:1 NKJV).
Casting out demons “Then the seventy returned with joy, saying, “Lord, even the demons are subject to us in Your name” (Luke 10:17 NKJV).
Binding and loosing spiritual powers “Assuredly, I say to you, whatever you bind on earth will be bound in heaven, and whatever you loose on earth will be loosed in heaven” (Matthew 18:18 NKJV).
Agreement in Prayer “Again I say to you that if two of you agree on earth concerning anything that they ask, it will be done for them by My Father in heaven”  (Matthew 18:19 NKJV).
Power over Satan “No one can enter a strong man’s house and plunder his goods, unless he first binds the strong man. And then he will plunder his house” (Mark 3:27 NKJV).
Angels “And He was there in the wilderness forty days, tempted by Satan, and was with the wild beasts; and the angels ministered to Him” (Mark 1:13 NKJV).

5. Blessing “I will make you a great nation; I will bless you  and make your name great; And you shall be a blessing” (Genesis 12:2 NKJV).
Prosperity  “Beloved, I pray that you may prosper in all things and be in health, just as your soul prospers” (3 John 2).
Seed Faith “Give, and it will be given to you: good measure, pressed down, shaken together, and running over will be put into your bosom. For with the same measure that you use, it will be measured back to you” (Luke 6:38 NKJV).
Positive Confession “Death and life are in the power of the tongue, And those who love it will eat its fruit” (Proverbs 18:21 NKJV).
Anointing “But the anointing which you have received from Him abides in you, and you do not need that anyone teach you; but as the same anointing teaches you concerning all things, and is true, and is not a lie, and just as it has taught you, you will abide in Him” (1 John 2:27 NKJV).
Being slain in the Spirit “Now when He said to them, “I am He,” they drew back and fell to the ground” (John 18:6 NKJV).
Posted by Evangelist Daniel King at 6:03 PM No comments: Links to this post 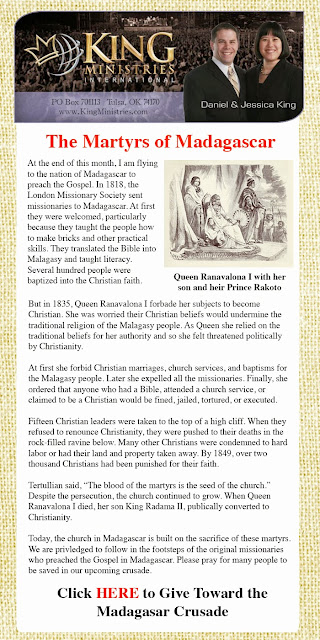 Posted by Evangelist Daniel King at 12:19 PM No comments: Links to this post

10 Facts about Your Assignment 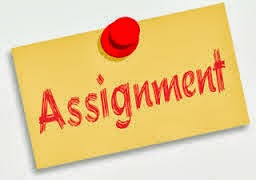 2. You must discover your assignment. What are you passionate about? What injustice do you get angry about? Joyce Meyer says, “What you can’t stand is a hint to what you are called to fix.” If you had the money and time to do anything you wanted to help people, what would you do?

3. Your assignment will be confirmed by your interests and passions. Are you good at singing? Your assignment may involve music. Can you fix a car? You might be called to be a car mechanic. Are you articulate? Perhaps you are called to preach. Once someone prophesied that I would sing on a music CD. I knew it was a lie because I do not have a good singing voice. I have always been interested in evangelism. When I was a teenager, I read the books of great evangelists. I would pass a soccer field and start dreaming of ways to fill the field with people who need Jesus. My passion revealed my assignment.

4. Your assignment will be something that no one else can accomplish. Look at your thumb. No one else on the planet had your fingerprint. You are unique and special. God has given you abilities that are not duplicated in any other person on earth. If you do not complete your assignment, it will never be done in the way that only you can do it.

8. Your assignment is attached to a particular place, people, or problem. You are not called to fix every problem in the world. You are called to fix a specific problem that no one else can fix. Stay in your assignment and don’t try to minister to everyone. Paul was not assigned to John Mark. A trash collector cannot collect trash in both Seattle and Miami, he has to choose a geographical location to fulfill his assignment.

9. By embracing your assignment, you are saying no to distractions. Know who you are and what you are called to do. I am called to be an evangelist. When I embrace my assignment, it forces me to decline many invitations that are good but have nothing to do with my calling. The more clearly your assignment is defined, the easier it will be to make important decisions. On Facebook, some people make comments that I disagree with but I do not say anything. Why? Because trying to set them straight is not my assignment.

10. When you are in your assignment, you will be sought out by people who need your specific assignment. People will appreciate you for who you are instead of for who they wish you were. I don’t get mad at my dentist because he does not cut my hair. You will be rewarded for the problems that you solve.

Posted by Evangelist Daniel King at 3:22 PM No comments: Links to this post