This month, I was invited to observe and participate in a massive evangelistic effort by Evangelist Luis Palau in New York City. Luis Palau is originally from Argentina and is a well-known evangelist in Latin America. God has also given him great fruit here in America. I am a member of the Next Generation Alliance, a group founded by Palau to train and encourage young evangelists.

For the past six months, Palau’s organization has been preparing for City Fest: New York City. They have conducted mini-fests all over New York City and it culminated with a two-day massive outreach. On Friday night, there was an evangelistic gathering in Times Square and on Saturday night there was a Festival in Central Park. Thousands of people made decisions to follow Jesus.

I volunteered to serve as a counselor. At my Gospel Festivals, I ask local church members to serve as counselors, so I figured I should sow a seed by serving as a counselor at another evangelist’s event. When Luis Palau gave the altar call, I saw a woman near me raise her hand to respond to the invitation. Her name was Sofia. She is 45-years-old and was born in a Christian home but had wandered far away from God. She heard the music as she was walking through Times Square and paused to listen. The message captivated her and she decided to rededicate her life to Jesus. As I led her in a salvation prayer, her eyes glistened with tears of joy. She was really impacted by the Gospel.


In Times Square there was a group of performers dressed up in costumes. They make money by taking pictures with tourists. I approached a man dressed in a Super Mario Brothers costume. I found out that his name is David and he is Hispanic. He has been in the United States illegally for thirteen years. In Spanish, I explained the Gospel to him and he decided to make Jesus the Lord of his life.

At the event in Central Park, I prayed with a Chinese family. Two sisters, a husband, and a son all made commitments to follow Christ. The family heard about the Festival through a radio advertisement and they managed to get tickets at the last moment. They asked me to pray for their family members who live in Mainland China to be saved.

Here are some of my thoughts after participating in this evangelistic event:

* I am inspired to dream big dreams. Luis Palau said he has dreamed of doing an evangelistic event in New York City for over fifty years. There is no dream too big for God to bring to pass.

* I am inspired to reach America with the Gospel. This nation needs God just as much as the villages of Africa and Asia. Far too many churches in North America have become anemic in the area of evangelism. It is time for us to do more to preach the Gospel here in America.

* I am inspired to reach big cities with the Gospel. Every two seconds, five more people enter the world than leave it; this adds 3,600 people to the population daily. With this rapid population growth, there is a migration from the village to the metropolis. We need to reach the small towns, but millions of people live in big cities and we need to have a strategy for reaching them.

* I am inspired to believe God for more resources. The total budget for Palau’s outreach in New York City was twelve million dollars. To me, this sum appears to be enormous. Most of our events cost between $10,000-$30,000 and sometimes, despite the generosity of people like you, it is difficult for me to raise even this smaller amount. I am believing God for more resources so I can reach more people for Jesus.

* I am inspired to build a team for evangelism. Palau does not work alone; he has a large team around him that works together for people to be saved. In our ministry, we have seen amazing fruit, but our staff basically consists of me and my wife, and my wife is busy raising our two children. My biggest prayer request is that God would bring several staff members alongside our ministry to help us reach more people for Jesus.
Posted by Evangelist Daniel King at 1:53 AM No comments: Links to this post

You've seen the cartoon, now help save the nation. 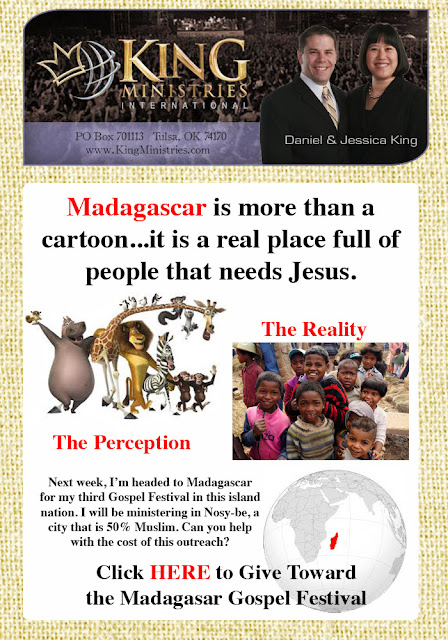 Posted by Evangelist Daniel King at 11:10 AM No comments: Links to this post

You Can Become a Master Soul Winner!

Posted by Evangelist Daniel King at 11:33 AM No comments: Links to this post

Posted by Evangelist Daniel King at 4:04 PM No comments: Links to this post