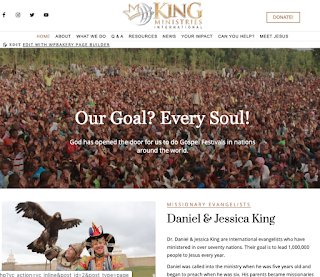 We have updated our website so we can be more effective in ministering to you and to other people around the world. Check it out at: www.kingministries.com

Here are some features of our new site:

* Training Videos: We have recorded powerful teaching videos on many different subjects including healing, how to have faith, how to fulfill the will of God, how to walk in the grace of God, and many other subjects that will benefit you.

* FREE Resources for Download: Many of my books are available for free download. We love giving material away to pastors, evangelists, and new believers. It is your support that allows us to give materials away for free!

* Witnessing Tools: We want to make it easy for people to meet Jesus. We are working on developing a variety of witnessing tools that will help people share their faith.

* Convenient and Safe Giving: Many of our partners choose to give monthly through our secure online giving portal. It is now easier than ever for you to help make a tangible difference every month by giving at our website.

Due to the launch of our new website, I will not be posting to Blogger anymore. From now on, I will be giving all my updates on our blog posts at https://kingministries.com/blog/

However, I will be leaving the content of this blog because there is a lot of good material here. Take a moment to look around and then come visit me at our new and updated site!

If you want to donate to help us lead people to Jesus, visit us here: https://kingministries.com/donate/

Posted by Evangelist Daniel King at 1:24 PM No comments:

Posted by Evangelist Daniel King at 2:03 PM No comments:

The Secret of Obed-Edom - translated into Mongolian

Posted by Evangelist Daniel King at 8:42 AM No comments:

Pictures of the Gospel - Message about how to Share Your Faith

July 14 Pictures of the Gospel (Daniel King) from The Father's House on Vimeo.
Posted by Evangelist Daniel King at 12:22 PM No comments:

Posted by Evangelist Daniel King at 3:27 PM No comments:

Posted by Evangelist Daniel King at 5:57 PM No comments:

God Moves in the Dominican Republic

Can God transform an entire city? Our whole family decided to travel to the city of Barahona in the Dominican Republic to find out.

The plan was simple. A series of outreaches would target different segments of society and then a crusade of healing and salvation would be held in the middle of the city. A team of over forty people came including evangelists Daniel King, Jack Myers, and Pastor Tod Delay.

The team spread out across the city looking for people who needed Jesus and to invite them to the crusade. When the team spotted a basketball game, the court quickly became a platform for talking about Jesus. A game of dominos became a chance to give an altar call. At an outreach to baseball players, 121 young men gave their lives to Jesus.

The team ministered in churches across the city to encourage local believers to be soul winners. All the pastors in the city were invited to a formal banquet and the team served them food and ministered to them. A TV channel invited us to talk about miracles. At the women’s conference, Jessica and our seven-year-old daughter Katie Grace ministered to the women. Our nine-year-old son Caleb was in charge of taking all the pictures and video.

On the first night of the crusade, a crowd gathered together. As Jessica led the people in a worship song, rain began to pour. But Jessica kept singing and the people stayed. Then I preached and souls were saved! Each night the crowd grew in size as people heard about the miracles God was doing. By the time the crusade was finished, great joy filled the city. A total of 492 people were saved.

Thank you for supporting the King Family on our mission trip to the Dominican Republic. Because of your prayers and your support a city was transformed for eternity.

Check out the pictures below to see what God did in the Dominican Republic. I am working on putting together a video for you to watch so you can see with your own eyes the miracles God did. I will be sending that to you soon so keep your eyes out for the video report.

Posted by Evangelist Daniel King at 12:36 PM No comments: