I am working on a book entitled, "The Soul Winner's Call." Here is an excerpt I wrote today about a soul winning call from hell.

"Can we go too fast in saving souls? If anyone still wants a reply, let him ask the lost souls in Hell." -William Booth

Is hell a real place? Jesus thought it was. Jesus told a vivid story about the horrors of hell.

Once there was a rich man who always dressed in the best clothes and feasted everyday on the best foods and wines available. At his front gate there was a beggar named Lazarus who suffered from open sores on his skin. Everyday Lazarus waited by the gate, hoping to be fed with the leftovers from the rich man’s table. His only relief was when the rich man’s dogs came and licked his sores. One day, both the beggar and the rich man died.

The beggar went to heaven. The rich man went to hell. As the rich man was being tormented in the fires of hell, he looked up and saw the beggar in heaven, standing next to Abraham. He shouted to them, “Father Abraham, have mercy on me and send Lazarus to me. Have him dip the tip of his finger in water and touch my tongue; for I am tormented in this flame.”

Abraham replied, “Between us there is a great chasm, so that no one can pass from heaven to hell, or from there to here.”

Then, the rich man became concerned for his five brothers who were still living. He begged Abraham, “I beg you therefore, father, that you would send Lazarus to my father’s house, for I have five brothers, that he might testify to them, and prevent them from coming to this place of torment.”

Abraham refuses the rich man’s request, saying, “If your brothers have not heeded the words of Moses and the prophets, then they will not listen to Lazarus, even if he comes back from the dead.”

In this story, we find a soul winning call from the pits of hell. If we could hear the voices of people who have gone to hell, they would shout with all their might, “DON’T COME HERE.”

Some theologians have dismissed this vision of hell by saying it is nothing but a parable. It is not a parable, it is a horror story about a reality that lays just beyond death’s door.

Other theologians have tried to soften the threat of hell by saying that hell is simply a state of nothingness. But, for this rich man, hell is a genuinely horrible place. This man has his senses, his memory, his reason, he is thirsty, he is in torment, he can think, he is concerned about his family members who are still alive.

Our society often says that hell is one big party, a place for old friends to get drunk together for all of eternity. But, according to Jesus, hell is not a party, it is torment. This man suffers from such agonizing thirst that he begs for just a drop of water to be placed on his tongue.

In this horror story, we hear a soul winning call from hell. The rich man is begging for someone to go tell his family that hell is a real place. If the dead could speak, they would warn us of the dangers of hell.

This is how I know psychics are fake. When psychics claim to talk to voices from “the other side,” those voices always have nice things to say. If psychics really spoke to dead people, many of those people would be shouting, “Hell is a real place. Tell my relatives to get their lives right with God.” By the way, did you hear about the psychic who recently went out of business? Yeah, she should have seen it coming.

If the church really had a revelation about the reality of hell it would “light a fire” under us to be soul winners. If you spent just ten seconds in hell, how motivated would you be to rescue people from such a horrible fate?

Posted by Evangelist Daniel King at 9:18 AM No comments: Links to this post

Posted by Evangelist Daniel King at 6:00 PM No comments: Links to this post

Today I visited one of the most famous landmarks in Dubai. If you notice, all the pictures of the Burj Al Arab luxury "seven star" hotel are from the side. It is built to resemble the sail of a sailboat at sea. But the front of the building facing the sea, is distinctly the shape of a huge cross. Every boat and luxury yacht that sails into the harbor of Dubai sees a giant 289 foot tall cross which is taboo in a Muslim culture. You will never see a picture of the building from this angle but the cross is there.

So the building that was built to be the iconic anchor for the entire Dubai waterfront is a cross. This is a stunning, 650 million dollar design mistake...and no one noticed until the hotel was almost finished.

The city where we conducted our Festival this week was founded back in 1901 as a Christian village. Today, many of Pakistan's Catholic priests and nuns come from this city. But even though there is a strong Christian presence, there are still thousands of Muslims in the area who have never heard that Jesus saves people from their sins.

Word began to spread that Muslims were welcome and on the second night of the festival many Muslims were scattered throughout the crowd. As the Word of God was preached, they listened intently. Then miracles began to happen. Men and women began jumping to their feet and announcing that Jesus had touched them. We invited them to the platform to testify.

The first woman to speak had been paralyzed on her right side for ten years. She demonstrated her healing by lifting her arm high over her head. Then she shocked the crowd by saying that she was a Muslim. "Who healed you?" we asked. "Issa ul Masih healed me! Jesus Christ healed me!" she exclaimed.

The next person to testify was also a Muslim, and the next, and then another. Out of thirty people who came to the platform to testify of healing, over two-thirds were Muslim.

The news that Jesus was healing Muslims spread like wildfire. The next night, the mullah from the local Mosque came to the Festival. He had heard that Jesus was healing Muslims and he told his entire mosque to attend the Festival. We gave him a seat of honor next to the pastors on the platform. When I began to speak, the Muslim leader stood up and put a rose garland around my neck and publicly thanked us for coming. The pastors were very excited, as this was unusual.

As the preaching began, thousands listened intently to every word as we explained that sin separates us from God and Jesus is the only way to heaven. When the invitation came for the people to receive salvation, almost the entire crowd prayed to ask Jesus to forgive their sins.

On the final night of the Festival, the size of the crowd increased again. Many more Muslims and Christians were healed by the power of God.

Posted by Evangelist Daniel King at 2:03 AM No comments: Links to this post 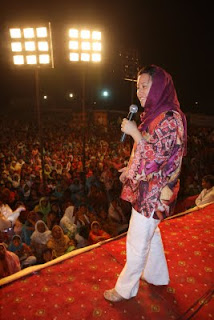 Posted by Evangelist Daniel King at 2:57 AM No comments: Links to this post 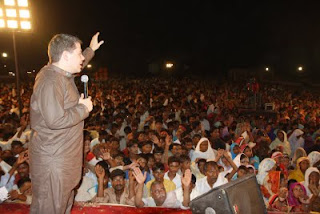 Posted by Evangelist Daniel King at 2:25 AM No comments: Links to this post