How Should I Make Decisions? - Move #9

Posted by Evangelist Daniel King at 2:08 PM No comments: Links to this post

We Value Every Partner

Today I had lunch with one of our ministry partners and talking to him made me so thankful for you. Let me tell you his story…

A Faithful Homeschool Student
His name is Tate Gomez. He first heard about our ministry when he was a homeschool student in ninth grade. I was invited to speak at a homeschool group here in Tulsa and he heard me tell stories about being raised as a missionary in Mexico. Tate was only fourteen years old but he decided to give a gift to help Jessica and I go preach the Gospel in India.

That first month, he sent a $20 bill in the mail to us. We used his gift to purchase books to give to new believers in India. When we returned home, we sent Tate a report about all the people who were saved at our crusade in Andhra Pradesh, India. After Tate heard about the salvations in India, he decided to support King Ministries every single month. 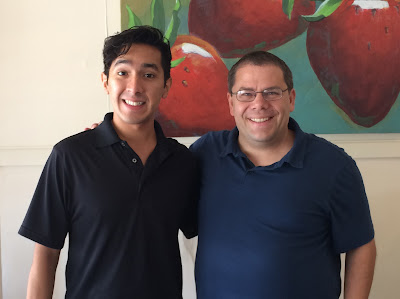 Tate was homeschooled. He did not have much money, but every month he faithfully sent a gift to help us preach the Gospel. One month he sent us a one-dollar bill scrunched up in the bottom of the envelope. Even though his gift was small, we were extremely grateful because in our ministry every dollar represents a soul. Over the years we have been able to lead at least one person to Jesus for every dollar that has gone through our hands. In some countries, our Gospel Festivals cost more than a dollar per person and in some countries it costs less, but when all our expenses are averaged and compared with our results, we have seen a harvest of at least one soul for every dollar that has been given to our ministry.

Now Tate is in his junior year at Oral Roberts University. He is trusting God for provision to pay for college and God has been providing.

This past summer, Tate had the opportunity to go on a mission trip with Oral Roberts University. Guess where he was sent? He went to Andhra Pradesh, India, the very place he had sowed into seven years before. He spent a whole month in Andhra Pradesh ministering at a camp for young people. Tate had to raise $3,500 to go on his mission trip and God provided every dollar. I think his first seed into our ministry became a harvest that allowed him to go on his first mission trip.

I’m Thankful for You!
The reason Tate’s story made me think about you is because our ministry is fully supported by individuals just like you and Tate. The truth is that our entire ministry is supported by people who give sacrificially. Each individual gift might be small, but when they are all added up together, they allow us to do amazing things for God.

Over the years, we have witnessed over two million people give their lives to Jesus at our meetings. It never would have happened without your help and the help of dozens of others just like you.

Every gift is important. Every dollar represents a soul. Without you, we would not be able to preach the Gospel. Thank you for your faithful giving. It is your generosity that makes a difference and Jessica and I are so grateful for you. You are part of an important team of people (The MillionHeirs Club) who are helping us to reach the world for Jesus. Thank you.

Expect a Miracle in Your Life
When you give to God, you can expect God to open up doors in your life. God will provide for you. God will give you wisdom. God will keep you healthy. You can expect miracles from God.

I am asking God for two harvests for every seed you sow into our ministry. The first harvest is a harvest of souls on the mission field and the second harvest is a supernatural outpouring of God’s blessing upon your life. You may not know it, but your giving benefits the kingdom of God and it benefits your life too.

P.S. This month your gift will help me go to a country in the Middle East to preach the Gospel. God is opening up doors for us in the Middle East to reach people that have never heard about Jesus. But, we can’t go without your help. Can you give a generous financial gift to help us this month?
Posted by Evangelist Daniel King at 9:04 PM No comments: Links to this post

The Story is in the Numbers 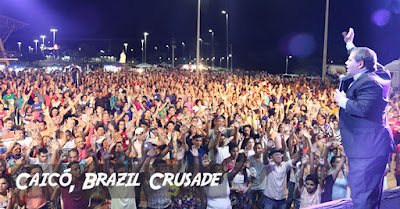 I am currently working on my Doctorate of Ministry degree at Oral Roberts University. I used our recent Brazil crusade as my research project and I did a survey of a random cross section of people at the crusade. The project was designed to give a snapshot picture of an evangelistic crusade. The goal was to discover who came to the crusade, why they came, and what impact the crusade had on the city.

Here are some of the stats from the crusade. Caicó, Brazil has a population of 66,246 people. The nine evangelical churches in the city have 1,357 believers which equals about 2% of the population.

How Many People Were Saved? 82.6% of the crowd repeated the prayer of salvation with me. 641 people filled out decision cards. This represents a 43% increase in the number of Christians in the city.

Was the Crusade Worthwhile? 100% of the pastors agreed that the crusade was worth the time, money, and preparation.

How Many People Did We Impact? Our team ministered to a total of about 7,792 people at the crusade. Our three-day soul winning conference was used to train local believers in how to pray for the sick, cast out demons, and lead people to Jesus. By the third night of the soul winning conference, 485 believers were in attendance. The church where the meeting was held was completely full and we filled the street in front of the church with chairs for the overflow crowd. 792 young people attended the youth concert. 504 children were in attendance at the children’s festival.

Why did People Come to the Crusade? 460 people responded to the question “Why did you come to this meeting?” 107 said, “My friend invited me.” 77 said they were curious about what was happening. 44 wanted to hear the music. 116 said they needed a miracle. 106 said they wanted to see miracles. 61 came because their pastor told them they should come. 112 came because they are curious about God. 6 did not know why they came and the rest gave some other reason why they came. These “other” answers include: Jesus called me, to seek the presence of God, because I am an evangelical, because I wanted to, because my wife invited me, I came to seek God, because I had a need, and because someone asked me.

I’m sorry if I overwhelmed you with numbers in this post but the truth is that numbers are important. God even named a whole book in the Bible, “Numbers.” The reality is that every number represents a story. Every statistic stands for a person. At the crusade in Caicó, Brazil many people were touched by God, saved, and healed. You played an important part in making that happen! Thank you for your prayers and your giving.