3 Books for the Price of 1 on Cyber Monday

Posted by Evangelist Daniel King at 9:25 AM No comments: Links to this post

Jesus promised we would be witnesses to the ends of the earth. One of these far away places is Lalo Kile in Ethiopia. I recently landed in Addis Ababa, the capital city, and drove fourteen hours to the location of our Gospel Festival. On the journey, often over bumpy dirt roads, we had a miracle encounter.

We were passing through Nekemte and stopped for a coffee (everyone in Ethiopia drinks coffee). At the roadside table next to us we heard some men talking about a Bible school. I greeted them and met the director of an International Victory Bible Institute, a Bible school planted by my home church, Victory Christian Center. It is amazing the impact that Victory has had around the world. I had the opportunity to visit the school and minister to the 198 students. They eagerly study the Word, despite lack of desks and sitting on wooden benches. 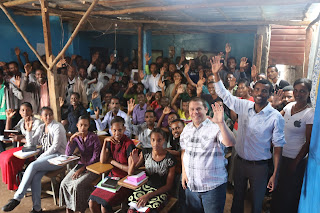 The conditions on this mission trip were quite primitive. There was no bathroom near my room so I had to walk up a little hill to a smelly public outhouse. Each morning, I was brought a plastic bucket of cold water to wash in and I had to scoop water out of the bucket and pour it over my head.

When we finally arrived in Lalo Kile, a delegation of pastors met us at the entrance of the town with a warm welcome.

On the first night of the Gospel Festival, about 15,000 people came. There was a man who had an infected foot. The doctor told him the foot would have to be amputated. Jesus miraculously healed his foot and the man started to march and dance. When he shared his testimony, all the people rejoiced with him. 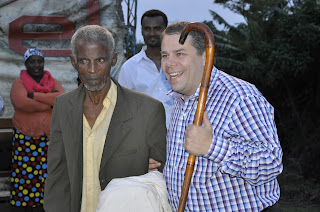 On the second night, 18,000 people came and I spoke on the paralyzed man in the Bible who was let down through the roof. A man blind in his right eye was healed. He brought a document from the hospital that proved he was blind. 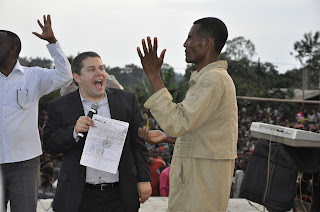 Each morning we held a Fire Conference at a local church for all the leaders. On the first day every seat was filled; the next day people were leaning in through the windows and lined up outside to listen. On the third day, there were so many people that the church was not able to hold them and we were forced to move outdoors. 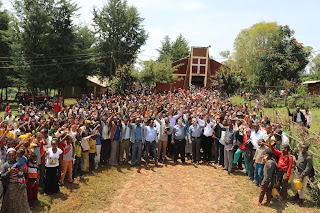 On the third day of the Festival, 35,000 people came and there were many more miracles.

There was a mosque right next to our grounds. Five times a day, an imam called Muslims to prayer. His sound system was loud, but ours was louder. As we drove by the mosque on Friday, there were only about ten pairs of shoes outside. On Saturday night as we drove by, a large rock flew from inside the mosque compound and hit the side of our car, leaving a large dent. The rock made a loud bang. If it had hit our window, it definitely would have shattered glass all over our car. We told the police, and they posted a guard next to the mosque to make sure they did not throw any more stones at the people walking by. 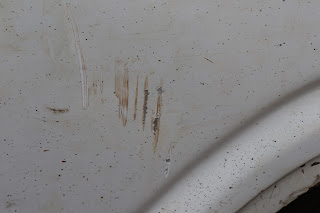 On the fourth day, 45,000 people were in attendance and I preached on the Four Greatest Miracles in the Bible. We put a large wooden cross right in the middle of the platform and did a drama about the life, death, and resurrection of Jesus. Those who raised their hand to accept Jesus, received a booklet and a counselor wrote down their names for the local churches to follow up on the new believers. 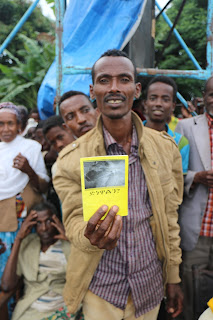 On Sunday morning, the fifth and final day of the Festival, approximately 55,000 people gathered together. The field was not big enough to hold everyone. I preached on the three greatest events in the Bible: Creation, Calvary, and Pentecost. We prayed with the whole crowd to receive the baptism of the Holy Spirit and thousands spoke in their personal prayer language for the first time. 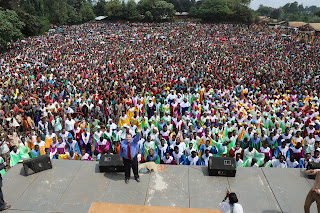 In Ethiopia, people were saved, healed and filled with the Holy Spirit. This Gospel Festival is another great success. Thank you for helping us to preach the Gospel of Jesus to the people living near the “ends of the earth.” 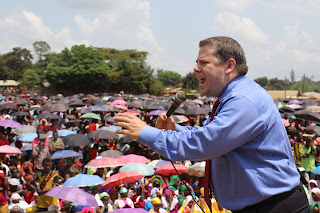 Can you help with the expenses of our next Gospel Festival? Click HERE to give today!

Posted by Evangelist Daniel King at 7:59 AM No comments: Links to this post