The Life of Evangelist Billy Graham

Today, Billy Graham went to heaven. I never had the opportunity to meet Billy Graham in person, but like millions of others, I heard him preach at a crusade.

In 2002, right after I graduated, Billy Graham did a four-day crusade in Texas Stadium in Irving, Texas right in-between Dallas and Fort Worth. At the time, BGEA was saying it would be Graham’s last crusade (it wasn’t, but for his last ten crusades they announced each might be his last).

I drove from Tulsa, Oklahoma down to Texas for the Saturday night service which attracted a total of 82,000 people with 12,000 of them forced to watch on a big screen television in an overflow area in the parking lot. I managed to arrive early enough to get a seat in the stadium.

Graham’s hair was white and his face was wrinkled with age, but he preached the Gospel with passion and conviction. After he gave the altar call, he sat down on a stool as thousands of people walked down to the football field to record their decisions for Christ. I was already saved and knew that I was called to be an evangelist, but I repeated the salvation prayer after Graham just to make sure. I walked down to the front and spoke to a councilor and kept a copy of the booklet he gave me.

As an evangelist, I have been studying the lives of great evangelists. A couple of years ago, I visited the Billy Graham museum in Wheaton, Illinois. Here are some of the highlights from Billy Graham's life.

The Life of Evangelist Billy Graham

Billy Graham (1918-2018) is widely acknowledged as the greatest evangelist of the twentieth century. He has preached the Gospel to an estimated 215 million people face-to-face in over 185 countries on every continent plus millions more through television, radio, and the printed page. The Gallop organization has rated him as “One of the Ten Most Admired Men in the World” fifty-one times.

Graham was born to William Franklin Graham, Sr. and Morrow on November 7, 1918 on his father’s dairy farm in North Carolina. He is the oldest of four children. He grew up doing chores on the farm and waking up at 3:00 A.M. to milk the cows. 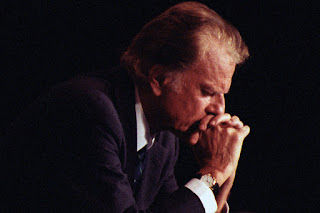 In September 1934, Graham was sixteen years old. He was invited by a friend to attend a revival meeting being conducted under a tent by an evangelist named Mordecai Ham. Graham felt like the preacher was speaking straight at him. He attended for several nights and finally, he responded to the altar call to the sound of a choir singing “Just as I am, without one plea.” On the night he was saved, he was the only person to go forward for salvation. But because Graham was saved millions of others have heard the Gospel. Brother Mordecai Ham's reward in heaven is great!

Graham attended Bob Jones College in Tennessee, but he did not like their rigid religious teachings so he soon transferred to Florida Bible Institute. On Sunday evening, the dean of the school arranged for Graham to preach at a local church. Graham had prepared four different sermons and he figured he would pick one of them to preach. But, he ended up preaching all four of them, and then looked at the clock and only eight minutes had passed. While in Florida, he went out preaching on the streets of Sulphur Springs. He joined a Southern Baptist church and they ordained him in 1939. Soon, at the age of nineteen, he was being invited to preach at local revivals.

After finishing his bachelor’s degree in theology in 1940, Graham moved to Illinois to attend Wheaton College to study anthropology. At Wheaton, he met Ruth McCue Bell who was a daughter of a missionary family to China. They got married on August 13, 1943 and they had five children.

Graham pastored for a short while in 1943 in Western Springs, Illinois for a salary of $45 a week. But, in 1944 he resigned from the church in order to become a traveling evangelist with Youth for Christ. In his first year with that organization, he traveled over 200,000 miles and spoke in 47 states.

In 1946, the Youth for Christ team ministered in Great Britain after the close of World War II. Graham’s enthusiastic and earnest preaching captured the attention of the young people of his day. There is a famous picture of him standing next to a large podium that says, “Youth for Christ” in large letters, and he has his finger pointed out, he is bending over with one knee almost on the ground. He has an intense look on his face, and it looks like he is pleading with people to come forward to be saved.

In 1947, Graham became president of Northwestern Schools in Minnesota and he was with them until 1952 when he resigned in order to focus exclusively on preaching the Gospel.

Billy Graham formed a team which in the early days was composed of George Beverly Shay the soloist, Cliff Burrows the music director, Grady Wilson an associate Evangelist and Ted Smith, the pianist.  During an evangelistic campaign in Modesto, California in 1948, Billy Graham called his team together to pray and discuss criticism directed at the Evangelists.  From this discussion came a set of principles to guide their future ministry. These principles included absolute financial and moral integrity; cooperation with all the churches whenever possible; avoidance of emotionalism, sensationalism, and negative preaching; and systematic follow-up of new believers.

Evangelist Chuck Templeton was an early friend of Billy Graham's. Templeton was handsome, talented, charismatic, and many people (including Graham) said he was a better preacher than Graham. But Templeton went to Princeton and studied liberal theology and Biblical criticism and eventually became an agnostic and resigned from the ministry. Templeton decided the Bible could not be trusted, but Graham based his ministry on his faith in God's Word. Templeton became a politician in Canada and Graham went on to lead millions to Christ. It is not the talented who do well in God's kingdom, but the faithful.

Billy Graham found himself deeply bothered by Templeton’s skepticism about the Bible. He started to question the Bible’s trustworthiness and he knew that doubt would destroy his effectiveness. He says:  “I began to study the subject intensely.  I also thought of Christ’s own attitude to toward the scriptures, and how he never once intimated they might be false.  Then one night I got my Bible and I went out in the moonlight and put it on a stump and knelt down.  I said, ‘Oh God, I cannot prove everything.  I cannot answer all the questions, but by faith I accept this book as the word of God.’ From that moment on, I have never doubted God’s word.  When I quote the Bible I believe I am quoting the very word of God and there is an extra power in it.  One month later we began the Los Angeles crusade.”

Before 1949, Graham had already conducted several citywide evangelistic campaigns but he was still relatively unknown. Then Graham was invited to conduct a revival in Los Angeles. The meetings became front-page news all over America and Graham became well-known almost overnight. The meetings caught the attention of newspaper magnet William Randolph Hurst who reportedly told his newspapers to “Puff Graham.” Other national newspapers followed suit and within a few weeks, Graham was known across America.

In 1950, Graham started the Hour of Decision weekly radio program. The program often aired live coverage of Graham’s crusades. Five years later, the program would be carried by 850 stations and would generate thousands of letters with testimonies of changed lives. The Billy Graham Evangelistic Association was incorporated in order to provide a legal covering for the start of the radio program. Soon, an evangelistic film was being produced and in 1951, a television program was launched.

In 1954, Billy Graham went to London for a crusade. At first, Graham faced great opposition by the press, but he soon won them over. Every night for three months, London’s Harringay Arena was packed to overflowing. The final meeting of the crusade was held in Wembley Stadium and a record breaking 122,000 people attended. Time Magazine wrote, “By almost any standard of measurement, Billy Graham's month-long London crusade ended as still another record-smashing triumph for the tireless evangelist. In all, Billy preached to 955,368 people, more than in any previous 30-day period in his life, and inspired 42,487 to come for ward to make their "decision for Christ." Despite early rumors that the crusade, which cost $840,000 to mount, might become his first major campaign to lose money, it had an estimated $42,000 surplus. Last week, when Billy sailed home to rest up for his next crusade (in Berlin, starting Oct. 16), he left be hind him an army of 22,000 Christian laymen who had helped with the crusade and are now ready to continue their work for evangelism in local churches. Still another permanent result of the crusade was the formation in London of 6,000 new Bible-study groups, which Billy calls "bridges between the church and God."⁠1If Los Angeles launched Billy Graham to national prominence in America, the London crusade brought him to world-wide attention.

In 1955, Graham conducted an All-Scotland crusade. In 1956, he visited the Far East and conducted crusades in India. In 1957, Graham filled Madison Square Garden in New York City for four months straight. In 1959, he did crusades in Australia and New Zealand.

Over the course of his ministry, Billy Graham preached the good news of Christ in over 185 countries in all six continents through crusade evangelism.  His largest crusade was in Seoul, South Korea in 1973, with 1.1 million people.  In Hong Kong in 1990, 103,000 people gathered together in three adjoining stadiums.  His largest meeting in North America was in Central Park New York City 1991 with a gathering of 250,000.  In Los Angeles in 1963, 134,000 attended his crusade which was an attendance record for the Los Angeles Coliseum, with an additional 20,000 people outside.

Graham was featured in Time Magazine, US News and World Report, Life Magazine, Newsweek, People, The Saturday Evening Post and many other magazines. He had a personal relationship with many of America’s presidents and George W. Bush gives him credit for leading him to the Lord. He met many world leaders and celebrities. Graham says, "We sometimes forget that the loneliest people in the world are those who are constantly in the public eye.  They have spiritual needs just like everyone else.  Also I found many world leaders who sense that our problems today are so complex that they defy solution.  They know the only answer is God.”

The Billy Graham Evangelistic Association is now led by Franklin Graham who said, “The opportunity for evangelism is greater than it has ever been.  More people who need to meet Jesus Christ are alive today than any other time in history.  Every soul is precious in the sight of God.” Will Graham, the grandson of Billy Graham, is now conducting evangelistic campaigns in America and around the world.


Daniel King (www.kingministries.com) is a missionary evangelist who has preached the Gospel in over sixty nations. He has led over two million people to Jesus in face-to-face meetings. Daniel and his wife Jessica live in Tulsa, Oklahoma. His newest book is, “How To Grow Your Church: 300 Innovative Ways to Reach Your Community for Jesus.”
Posted by Evangelist Daniel King at 6:33 AM No comments: Links to this post