Posted by Evangelist Daniel King at 2:03 PM No comments: Links to this post

In Memory of Evangelist Reinhard Bonnke 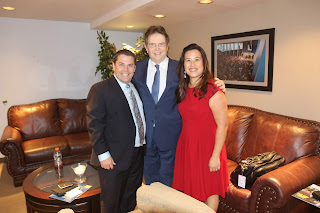 It is with great sadness that I heard Reinhard Bonnke went to heaven today. I have been inspired by his example and motivated by his fire. The first time I met him he told me, “That which is considered great today is going to be normal tomorrow!” His massive crusades are just the beginning of what God is going to accomplish in the area of mass evangelism!

Reinhard Bonnke (1940-2019) was born in Germany on the eve of World War II. After the war, his father pastored a small Pentecostal church in Krempe. From an early age, Bonnke knew God was calling him to be a missionary to the continent of Africa. At the age of eleven, he was filled with the Holy Spirit.

He attended a Bible school in Swansea, Wales that had its roots in the Welsh revival. On his way home from Bible school, he miraculously had an encounter with George Jeffreys (1889-1962), a famous evangelist who founded the Elim Pentecostal Churches.

He married Anni Sülzle in 1964. His denomination required every missionary to pastor for two years so right after they married, they planted a church in Flensburg, Germany. After two years, they moved to South Africa to serve with the Apostolic Faith Mission. He was sent to the Kingdom of Lesotho. It was known as the “boneyard for failed missionaries” but Bonnke achieved great success. He wrote a series of Bible lessons and distributed them to every house in Lesotho using a team of one hundred “bicycle-evangelists.”

While Bonnke was in Lesotho, God showed him a vision of a “blood-washed Africa,” an Africa washed in the blood of Jesus. Bonnke began to proclaim, “All of Africa shall be saved, from Cape Town to Cairo."

Reinhard and his wife Anni spent seven years as missionaries in the country of Lesotho reaching out to people in the traditional way, but Reinhard became frustrated at the low number of salvations. In a mighty step of faith, in 1974, he launched his evangelistic organization which is now known as “Christ for All Nations.” The ministry held its first crusade in the national stadium in the country of Botswana. Out of the many churches in the city, only one small fellowship decided to help with the crusade. Bonnke was disappointed when only one hundred people came the first night. Yet, as he preached a powerful message, a man jumped up and shouted, “I’ve just been healed!” Other healings began to happen, and news spread across the city that God was doing miracles. By the last night of that first crusade, the entire stadium was packed. Thousands were saved and healed and twelve years later, when Reinhard returned to do another crusade in the city, the leader of a large denomination announced that eighty percent of his pastors had been saved in that first crusade.

His first tent seated eight hundred people, but later a huge tent was purchased to accommodate the massive crowds of people who began coming to Bonnke’s crusades. This tent seated thirty-four thousand people and covered three football fields, but the tent was too small. Soon, crowds of up to one hundred and fifty thousand people were attending each meeting.

As the size of the crowds multiplied, Reinhard started to hold his crusades outside on fields. He formed two crusade teams, one for east Africa and one for west Africa, so that the ministry could accelerate.

He gave away 103 million books in over 123 languages. He often held “Fire Conferences” to train church leaders for world evangelism. People flocked to his crusades because of the miracles which result from the mighty preaching of the word.

Reinhard often said he was “plundering hell to populate heaven” and the reports from one crusade prove that he accomplished exactly that. On November 12, 2000, 1.6 million people came to single crusade meeting in Lagos, Nigeria. Over thirty thousand pastors and church leaders attended the “Fire Conference.” In this historic, six day crusade, over six million people heard the gospel message. Blind eyes were opened, breast tumors disappeared, the lame walked, mutes began to speak, and many other miracles were reported. Six million booklets were passed out and over two thousand churches participated in following up on all the converts who were saved. 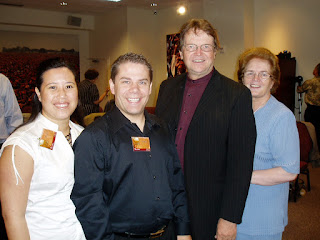 Here are some of my favorite quotes from Reinhard Bonnke:
We must plunder hell to populate heaven.
I have a vision of a blood washed Africa from Capetown to Cairo.
Africa shall be saved!
The church of Jesus Christ is not a pleasure boat, it is a lifeboat. From the captain to the cook, all hands are needed on deck for soul saving.
The Gospel is controversial? The color of a rose is only controversial in the house of the blind.
A church that does not seek the lost is lost itself.
Make the Great Commission our Main Ambition!
Many people call themselves evangelists and do nothing evangelistic. Evangelism is far more than traveling and speaking. Evangelists are not popular in the church today. But our job is a most honorable one. Sure some evangelists have made mistakes. But if some blow it, others do not. We are rescue workers.
When I was young, I went from prophecy to prophecy. Now I go from fulfillment to fulfillment.
After Bonnke was threatened by Osama Bin Laden, God told him, “You are Satan’s prime target for destruction, but you are my prime target for protection.”
Creation cost God nothing, salvation cost Him everything.
If you seek the saved, you produce conventions, if you seek the lost you produce crusades. Jesus came to seek and save the lost.”
An army needs a leader (Jesus), orders (Great Commission), soldiers (us), and weapons (Power of the Holy Spirit). Jesus said go, but He also said, “Receive the power of the Holy Spirit.” He does not send us into battle unarmed.
Without Jesus, we can do nothing. Without us, God does nothing. A lamp needs electricity, but electricity needs a lamp. Where can God’s power go without God’s servants?
God’s word is not a question mark, it is an exclamation point!
On the value of Mass Evangelism vs. Personal Evangelism Bonnke said, “There are as many methods as there are people. If sugar is mixed with sand, the elephant will not get it, but the ant will.”
I preach the A-B-C’s of the Gospel, but I study the X-Y-Z.
Prayer will not save the world. People must be told. The Gospel walks on two legs: Prayer and Preaching
On Being slain in the Spirit: If the Holy Spirit does not mind falling, then you should not mind falling.
Don’t wait for opportunities. Create opportunities.
The decision card is a bridge from crusade grounds to churches.
When asking pastors to support his crusade Bonnke said, “I bring my nets and I want to borrow your boats. I will leave every fish for you.”
Jesus did not die on the cross so that pastor’s could have a well-paid job. He did not raise from the dead just to raise our standard of living.
What is most important to God must be most important to us.
Those who do not succeed do not need criticism, they need help.
God’s words in my mouth are as powerful as God’s words in His mouth.
He was accused of building up false hopes with his messages about miracles. Bonnke replied, “The Bible is a message of hope. If you preach the original message, you will see original results.”
I seek the lost, Jesus saves them.
God has no maximum. He said, “Go into ALL the world.” He promised to pour out His spirit on ALL flesh. He desires for ALL men to be saved.
The less Holy Spirit we have, the more cake and coffee we need to keep the church going.
God always works with workers and moves with movers, but He does not sit with sitters.
The Gospel is ‘Good News’, not ‘Good History,’ because when it is preached, it happens.
I don't want to play with marbles when God told me to move mountains!
Don't accept the applause of men, and you won't be destroyed by their criticism.
Don't plan with what is in your pocket; plan with what is in God's pocket.
Jesus will lift you out of the deepest pit, but He will not lift you out of your easy chair.
Christianity, boring? So is television...if we don't plug in.
Those who forever seek the will of God are overrun by those who do it.
We can make an impression on this world if the world doesn't make too much impression on us.
The Gospel is a gospel of power or it is nothing at all.
Faith is a leap into the light, not a step into the darkness.
[Evangelism] is not a profession. It is a calling. The greatest thing in the world is to serve God.
I preach the simple ABC’s of the gospel. When I preach I am not trying to sound like a professor, or a Bible scholar, or a homiletics expert. I am helping people who are outside of the kingdom of God enter it by the blood of the Lamp.
God is the worker of miracles for his people. I believe the signs that followed Jesus as He walked the earth could - and should - be true in our world today.
I am not a healing evangelist. I am a salvation evangelist who also prays for the sick. God told me Africa shall be saved, not Africa shall be healed. Sickness is not the ultimate evil, therefore healing is not the ultimate good. Sin is the ultimate evil, and salvation is the ultimate good.
The day of reaping with a sickle is past. The time for the combine harvester has come.
An unpreached Gospel is no Gospel at all.
I was addicted to crusades. They fulfilled most every desire in my heart and left little room for anything of lesser importance.
There is no room for competition in evangelism.
Posted by Evangelist Daniel King at 4:04 PM No comments: Links to this post