This past week, I was ministering in the Central American nation of Guatemala. Our team had the opportunity to visit the poorest of the poor in an obscure village far off the beaten path. The water source for the village is a lake that people drink from, do their laundry in, and use to water their animals. Because of the unsanitary conditions, many people in the village suffer from various diseases. Our team gave away 35 water filters to the families in the village so that their children would have clean water to drink. As we preached the Gospel in the village, 53 people prayed with us for salvation! The ministry we worked with has planted a church in the community in order to follow up on the new believers.

After our village crusade, I came back to Guatemala City and preached in an upper-class church on Sunday morning. The church is full of lawyers, doctors, and the elite of society. God touched these people the same way He touched the poor people in the village. As I was thinking about the two different types of ministry I had the privilege of doing in Guatemala, God gave me a powerful revelation.

I have been studying the book of John and I was struck by the contrast between John Chapter 3 and John Chapter 4. In John 3 we discover the story of a man named Nicodemus who visited Jesus in the middle of the night. In John 4 is the story of Jesus’ encounter with the Samaritan woman at the well.

Today, the same is true. Both the rich and the poor, the men and the women, the young and the old, the lowest to the highest, the kings to the peasants, the influential people and the nobodys, the down-and-out and the up-and-out, they all need Jesus. From the richest billionaire in his mansion to the poorest farmer in Africa who sleeps on a dirt floor, every person has a God-shaped-hole in his or her life that desperately needs to be filled.

To Nicodemus, Jesus said, “You must be born again” (John 3:7). To the Samaritan woman, Jesus said, “If you knew the gift of God…He would have given you living water” (John 4:10).

In Guatemala, I ministered in the village to people like the Samaritan woman, and I ministered in the city to people like Nicodemus and God moved both times. God loves everyone and He blesses everyone no matter what level of society they live in. As we gave the life-saving water filters away, I was reminded about how Jesus gave the Samaritan woman the gift of living water. Just as Jesus told Nicodemus to be born-again, we told the people how they could be born-again into God’s kingdom

Every person needs Jesus. He is willing to meet us whenever we come to Him, whether by day or night, in sickness or in health, in poverty or with wealth. Jesus wants everyone to experience eternal life!

About Daniel King
Daniel King is a missionary evangelist who has preached the Gospel in over sixty nations. He has led over one million people to Jesus in the past ten years. Daniel and his wife Jessica live in Tulsa, Oklahoma. To connect with Daniel visit: www.kingministries.com

Posted by Evangelist Daniel King at 11:36 PM No comments: Links to this post 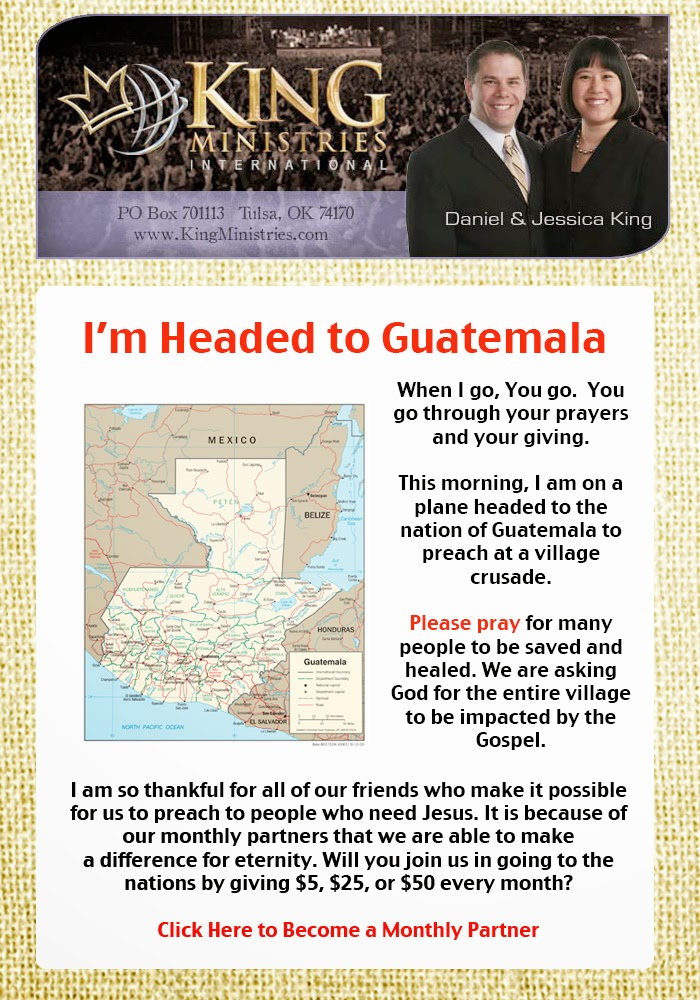 Posted by Evangelist Daniel King at 3:50 AM No comments: Links to this post