When I landed in the capital of Madagascar, I received a report from our Festival director. He said,

“Please pray, all of the posters for our event have been torn down by Muslims.”

Madagascar is the fourth largest island in the world, but our Festival was on a small island just off the northern coast of Madagascar. It was in the city of Nosy-be, a city that is fifty percent Muslim. There are many places we could go to preach the Gospel, but Nosy-be is the type of city I like to visit. There are a few small churches in the city but the majority of the population does not believe in Jesus.

As I flew into the city, I prayed, “God, help us to lift Jesus up in this city. I pray that everyone in the city; Muslims, animists, and Christians have an encounter with the living God this week.”

Our festival director still had a stack of posters that he had saved. At 5am in the morning a team of young people from the local churches marched out into the neighborhoods and put up new posters in order to replace the ones that had been torn down. Our persistence in the midst of persecution would produce results.


Despite the difficulty with the posters, the first night’s attendance was strong. Everyone loved the upbeat music. When I started to speak, I announced, “I welcome our Muslim friends and I welcome our Christian friends. This festival is for everyone. Jesus will perform miracles for anyone who trusts Him, regardless of your religion.” About one dozen people were healed on the first night. The outstanding miracle was a man who was deaf in one year who was suddenly able to hear perfectly. As I tested his hearing, the crowd started to celebrate.

The next morning, about two hundred pastors and leaders attended our Fire Conference. I taught on the importance of evangelism and challenged the believers to go out into their neighborhoods and invite people to the Festival. In the afternoon, I had some free time so I visited the local food market to talk with the locals and invite them to come to the Festival. In the market there were dozens of food stands full of carrots, tomatoes, spices, eggs, meat, live chickens, fish, and open bags of rice. As I walked around, I asked the shop owners, “Did you go to the Festival last night?” Many of them had attended. One shop owner said, “I am a Muslim but I went last night.” I asked him, “What did you think?” He replied, “I saw many miracles. My wife is very sick. Tonight I will bring her for prayer.” Right there in the public market place, this Muslim shopkeeper allowed me to lay hands on him and pray for him and his wife. 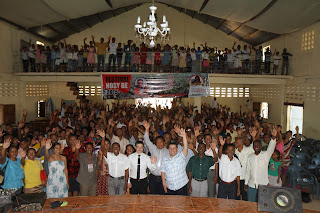 That night, the crowd size increased. Word had spread about the miracles that Jesus was performing. We announced, “Jesus is more than a prophet. He is also Lord and Savior. Jesus came from heaven and gave His life by dying on the cross to pay the price for sin. Everyone who calls on the name of Jesus will be saved.” When the altar call was given, I noticed Muslim people throughout the crowd that were praying with us for salvation.

On the final night, the crowd increased again. Four thousands decision cards were passed out by our councilors to people who prayed for salvation. Many of the people who decided to follow Christ came from Muslim families. The local churches will be meeting with these people and they will start the long process of discipleship. 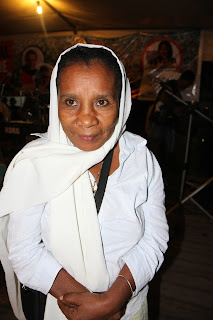 The Bible tells us there will be great rejoicing in heaven when a single sinner repents. I also rejoice when people decide to give their lives to Jesus Christ. This is why we do what we do. Tears of joy fill my eyes every time I have the privilege of introducing people to Jesus. There is no greater feeling then knowing that a person has turned from darkness to light, from sin to holiness, from a false religion to a true relationship with a living God.

P.S. At the end of this month, I am headed to the Central American nation of Belize. This is the only nation in Central America that I have never ministered in. I will be preaching in several churches and meeting with a group of pastors who want to invite us to do a crusade in this country. Your gift this month will help with the expenses of this trip. To give a financial gift, CLICK HERE
Posted by Evangelist Daniel King at 1:47 PM No comments: Links to this post