At the pastor's conference, the church was completely full so hundreds of people gathered around the church and sat on the grass listening to the message. While one of our team members preached, I decided to take pictures of the people.

I began by taking a portrait shot of one woman. Then I turned my camera around and showed her the picture on my digital screen. She started laughing and then all the other women wanted their pictures taken.

At the back of the group was an ancient woman dressed in typical Ethiopian clothes. She only had two and a half teeth in her head. She was almost totally blind. But, as I was taking pictures of the other women this old lady started saying over and over again, "Work it, work it."

She did not know any English but somehow she knew that when you take pictures you are supposed to say, "Work It." Her one phrase of English made me laugh so hard.

Posted by Evangelist Daniel King at 9:45 AM No comments: Links to this post

He Could Not Walk or Talk

One family desperately needed a miracle. They live in a village that is one hundred and twenty three miles away from where we are conducting our Gospel Festival. Somehow, a publicity flyer made it all the way to their village. When the mother saw the announcement that Jesus would heal the sick, she decided to come. The five family members gathered up all the money they had and purchased bus tickets for 40 burr each to come to the city where our Gospel Festival was taking place.

The youngest member of the family is Brroke. He is a seven-year-old boy and from birth he has been unable to walk or talk. When the family arrived at the festival grounds, they asked where they should go to receive a miracle. An usher told them to sit in the sick tent.

In the middle of the service, Pastor Eric Hamp, one of our team members entered the tent and began to pray for the sick. The family waited patiently for their turn. When Pastor Eric came to them, they pointed to the boy's mouth. "Can he speak?" Pastor Eric asked. "No, he has been unable to speak since birth," the mother explained.

Pastor Eric laid his hands on the boy's head and began to pray. Then he put his fingers inside the boy's mouth and grabbed his tongue. "I curse this dumb spirit in the name of Jesus, come out of this boy," he commanded as he jerked the boy's tongue. Startled, the boy stared at him. Pastor Eric looked right in the boy's eyes and said, "Halleluiah."

To everyone's amazement, the boy repeated the word. When the mother heard her son say "Halleluiah," she started to shout. Right there in the prayer tent, the entire family began to dance and celebrate because of the miracle. Then Brroke stood up and began to walk for the first time in his life. He was completely healed.

The family came to the platform to testify. The crowd listened in amazement as they heard about the miracle in Brroke's life. In front of all the people, Brroke shouted "Halleluiah" and ran back and forth across the platform.

Later, as we interviewed the family about the miracle, we asked the mother, "Are you happy?" With a smile she replied, "Yes" but then she paused and said, "My daughter, Teshsale, also needs healing. She is deaf in her right ear." The team prayed for the daughter and immediately God opened her ear and she could hear. The entire family received the miracles they needed.

Posted by Evangelist Daniel King at 10:10 AM No comments: Links to this post

From the Snow of Canada...to the Desert of Ethiopia 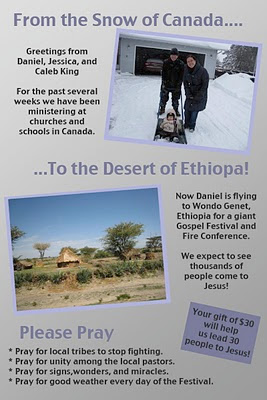 Posted by Evangelist Daniel King at 3:27 PM No comments: Links to this post